Promote, Protect and Strengthen the role of the Tyne Valley Line and the work of the Community Rail Partnership

More trains will be operating to/from Prudhoe from 19 May 2019.  You can find the comprehensive timetable here or why not print or save the following departure times here 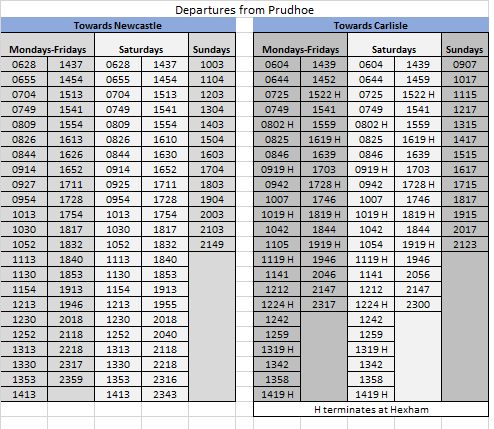 Trains travel frequently from Prudhoe to stations on the route to Newcastle and Carlisle. For up to date information also see:

Prudhoe is situated on a hill on the south bank of the River Tyne and was originally part of the parish of Ovingham. The town and its castle have had a rather violent past: In 1173 and 1174 it was sieged by King William of Scotland and during the English Civil War it was occupied by both Parliamentarians and Roundheads.

While there is evidence of occupation since the Bronze Age, as two burial sites and a stone axe head have been found in the area, the development of coal mining and the associated industries led to a dramatic rise in the population from the middle of the 19th century.

Today heavy industry in Prudhoe has all but disappeared but regeneration is ongoing. A riverside county park has been created which runs from Prudhoe to Newburn a few miles down river. Facilities for a whole range of leisure activities have been developed including fishing and canoeing. For further information see the Prudhoe Community Partnership website.