Gilsland is a small village, population 400, which lies on the Tyne Valley Line and straddles the Northumberland/Cumbria border. Like so many small villages public transport is poor. In Edwardian times Gilsland was a busy station with hundreds of visitors going the the Gilsland Spa and all fast trains called here. However passenger numbers declined and the railway station in the centre of the village closed in 1967. The bus service that replaced it now stays on the main road and bypasses Gilsland (and neighbouring Low Row & Greenhead). 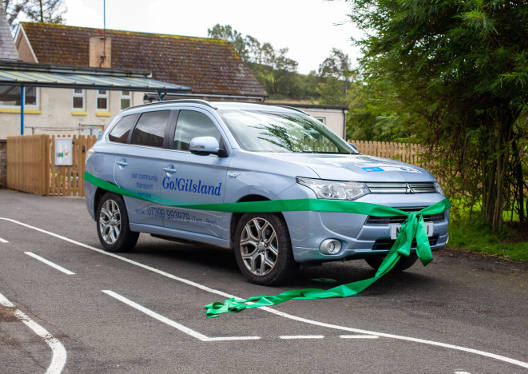 This has led to a drift in population and disappearance of almost all facilities, but the village is fighting back. Being situated on the Roman Wall there is a big potential for tourism. COGS, the Campaign to Open Gilsland Station, has been launched but re-opening stations take years, so the villagers began to help themselves. Fundraising began with the children of Gilsland C of E Primary School holding a sale of work to raise funds, which encouraged much larger donors.

GoGilsland and the Tyne Valley Community Rail Partnership became partners to fund the purchase of a hybrid electric car capable of carrying four passengers and their luggage to take villagers and the tourists who come to visit the World Heritage Site of Hadrian's Wall and Gilsland to connect to the nearest railway stations at Haltwhistle and Brampton. A number of volunteer drivers have been recruited and trained.

A large number of sponsors have contributed to the project including Northumberland National Park, The Joicey Trust, Gilsland Church of England School, the National Lottery and CrossCountry Trains.

Fiona Forsythe, Tyne Valley Community Rail Partnership Officer said, ‘We were delighted to be able to work with GoGilsland and CrossCountry Trains to secure funding for this project. Through reading a toolkit which had been sponsored by Cross Country on The Socially Enterprising Railway we realised that we too could be ‘socially enterprising’ and happily support the project.’

Alex Bray, Stakeholder Liaison Manager at CrossCountry, commented ‘We are delighted to see that Tyne Valley Community Railway Partnership has been able to use the Socially Enterprising Toolkit to develop an idea that will bring the railway closer to the heart of the communities they serve. The use of the car will be a great incentive to make visiting Gilsland more accessible and deliver a range of social and economic benefits to the area.’

Launch Day on 11th September was a great community event. Lady Jane Gibson, Chair of Hadrian's Wall Partnership pulled the ribbon with three of the schoolchildren to launch this new community resource. The local schoolchildren were given the opportunity to develop their understanding of the technology behind electric cars through exploring the G-Gaxy with Tim Coombe of Sustainable Brampton (and beyond).

We all hope this project every success and hope this will lead to a big increase in visitors to the area and help improve the chances of a re-opened station in Gilsland.